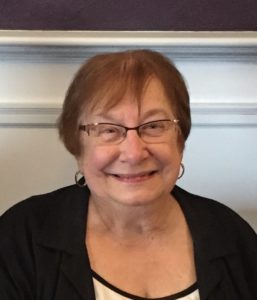 JoAnn Marie Seifert, age 83 of Rogers, passed away peacefully at home surrounded by her family on Thursday, September 17, 2020. She was born August 2, 1937.

JoAnn was a 1955 graduate of Foley High School. She received her nursing degree at St. Cloud Nursing School and worked as an OB nurse at Golden Hills Maternity Hospital in Golden Valley, school nurse at Rogers Elementary, and retired as a Charge Nurse at Guardian Angels in Elk River.

On August 27, 1960, JoAnn Kotsmith and Edward Seifert were united in Holy Marriage at St. John’s Catholic Church in Foley. They moved to Rogers in 1965, where they raised their four children: Laurie, Joseph, John, and Robert. JoAnn cherished the community, where she enjoyed being the Rogers Avon Lady for the past 42 years, having daily coffee with her group of friends, traveling, and spending time with her family.

JoAnn was a faithful member of Mary Queen of Peace St. Martin Campus where she volunteered, sang in the church choir, was a member of Christian Mothers, and taught CCD.

Her lifelong priorities were God, family, and work. She was a foodie, and an exceptional cook and baker, who loved to share her food and famed cookies with family and friends. She had a kind heart, enjoyed socializing and was very proud of her family and loved her grandchildren and great-grandchildren.

She is preceded in death by her parents, Joseph, and Ella (Joseph) Kotsmith.

A rosary and reviewal will be held beginning at 10:30 a.m., before a Requiem Latin Mass at 1:00 p.m. on Wednesday, September 30, 2020 at Mary Queen of Peace St. Martin Campus, 21304 Church Ave, Rogers MN. Burial to follow at St. Martin Catholic Cemetery in Rogers.