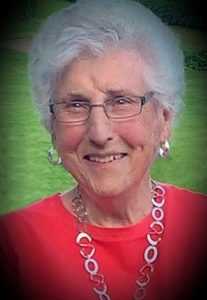 Elva was born in August 1930 in St. Michael, MN to the late Otto and Martha (Jaeb) Zachman, the third of eight children.

On January 9th, 1954 Elva married Richard Weber. They raised three children together, Keith, Nancy, and Kathy, on the same family farm where Richard was born.

Never one to sit still for very long, Elva moved through life at a high speed. If you called to invite her anywhere, she was probably already waiting outside to be picked up before you could even say goodbye and hang up the phone. She loved entertaining for friends and family, and especially loved when her grandchildren and great grandchildren would stop by for visits.

A devout Roman Catholic, Elva attended daily mass at her parish, Mary Queen of Peace, and in earlier years, was an active volunteer in a variety of ministries.
Elva also enjoyed traveling, watching the Minnesota Twins, and playing pull tabs and cards.

A Mass of Christian Burial for Elva Weber will be held on Tuesday, August 3rd, 2021 at 11 A.M. at Mary Queen of Peace Catholic Church, St. Walburga campus. Interment will follow at St. Walburga Cemetery.
A visitation will be held Monday, August 2nd, 2021 from 4-8PM at The Peterson Chapel St. Michael-Albertville Funeral Home.

Casket Bearers will be her eight grandchildren.